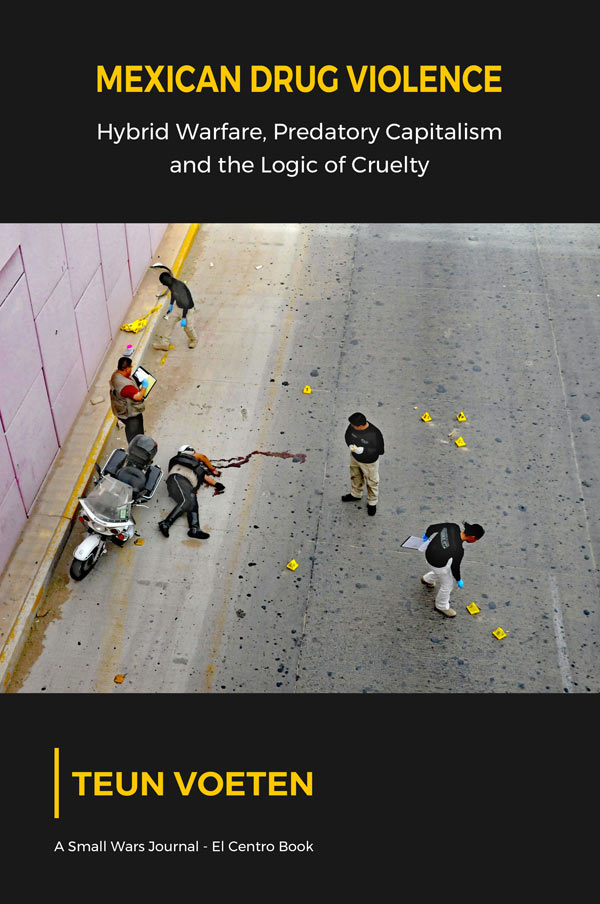 This is the completely rewritten, edited an updated version of Dr Voeten’s PhD thesis. Voeten has been focussing on the Mexican Drug Violence since 2009, as a photographer, journalist and anthropologist. It is currently the most violent conflict in a modern, industrialized country, taking nearly 250.000 casualties in 15 years time. In his book, Voeten first analyzes the nature and dynamics of the drug violence. He argues how it is a new type of conflict: Hybrid warfare, multidimensional, elusive and unpredictable, fought at different levels, with different intensities with multiple goals. The war ISIS has declared against the West is another example of hybrid warfare.

Voeten proceeds to analyse how a neoliberal system in overdrive has created a class of superfluous, expendable people who become the foot soldiers for organized crime. Drug cartels function as predatory, hyper-capitalist corporations that thrive in a globalized economy and use, just as legitimate corporations, elaborate branding and marketing strategies.

Voeten also looks at the anthropological, individual level and explains how people can become ruthless killers and actually enjoy killing. He talks to Mexican assassins for hire (sicarios) and compares them with Jihadists, West-African child soldiers and crack dealers from New York. He explores the sense of ‘senseless’ violence and researches how humans are able to commit ‘inhumane’ acts that are in fact very human.

US customers can order “Mexican Drug Violence” directly from X-libris

You can order the English language academic version (the original PhD thesis) straight from the author, Dr Teun Voeten 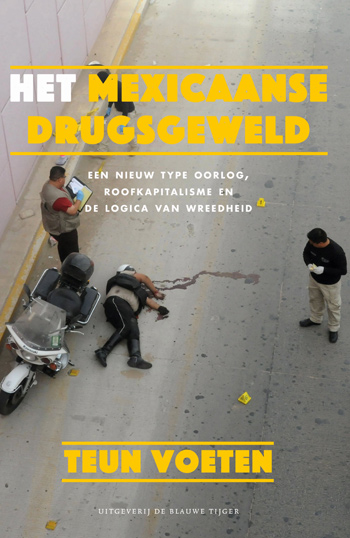 "Teun Voeten has penetrated one of the most dangerous societies in the world - the narco-traffickers of Mexico - and come back with far more than a stunning portrait of crime syndicates. He has developed a profound understanding of how violence works and why it is so hard to eradicate. His assessment is brutally honest and shuns the facile myths that exist in both right-wing and left-wing thought - thank god. It is a deeply extraordinary and original work."
-- Sebastian Junger, war journalist, anthropologist and bestselling autor of The Perfect Storm and Tribe: on Homecoming and Belonging

"This book is a reminder of what ethnography should be. Relativism is firmly dismissed, in favor of empathetic exploration. Prose is direct and jargon-free. Detail-rich stories are brought to life, framed by theory, and situated in historical context… a penetrating study of the human condition, which is equally fascinating and useful -- an all too rare achievement in the field today. "
-- Nicholas Krohley, author of The Death of the Mehdi Army: The Rise, Fall, and Revival of Iraq’s Most Powerful Militia

"A solid, well-crafted, nuanced, but also bloodcurdling account of extreme violence, based on courageous fieldwork. Most studies on crime and violence focus their attention on the perspective of the victim. Teun Voeten is one of the few researchers who does not hesitate to also investigate the perspective of the perpetrator, and to confront the darker side of humanity."
-- Maarten Boudry, philosopher and co-author of Science Unlimited?: The Challenges of Scientism

"Revealing, penetrating and urgent. Fast-paced prose, written with visual imaginary by a journalist who has been at the first line of every international conflict, including drug wars."
-- Linda Polman, investigative reporter and author of War Games: The Story of Aid and War in Modern Times

"A unique insight into the raw reality of modern conflicts. Voeten’s combination of journalistic experience and academic insights truly reveals how war and crime are increasingly intertwined in today’s societies."
-- Martijn Kitzen, Associate Professor of War Studies at The Netherlands Defence Academy and former military officer

In 1994, Voeten started a photo reportage on the underground homeless in New York. This eventually became his first book. ’Tunnelmensen’ (1996) was published in Dutch by Atlas, Amsterdam. It appeared in an updated and translated version in 2010 in the USA.

Voeten made three photo books: ‘A Ticket To’ (1999), a dark, somber book with black and white photos from the conflicts in Afghanistan, Bosnia, Rwanda and Sierra Leone. ‘Narco Estado, Drug Violence in Mexico’ (2012) depicts the horrible violence in strong color photos. 'New York, New York' (2005, 2021) features his architectural work he has been shooting since 1989.

After being nearly killed by doped up child soldiers in the civil war in Sierra Leone, Voeten wrote ‘How de Body? Hope and Horror in Sierra Leone’ which appeared in the Netherlands (2000) and the USA (2002). A Chines translation is in the making.

His PhD research resulted in the academic publication ‘The Mexican Drug Violence Hybrid Warfare, Predatory Capitalism and the Logic of Cruelty’ (2018). A Dutch journalistic version appeared the same year. In 2020, Small Wars Journal/El Centro published a completely rewritten, edited and updated version of this study.

In 2019, the city of Antwerp commissioned him to research drug related crime. This resulted eventually in ‘DRUGS. Antwerpen in de greep van de Nederlandse syndicaten’ (2020).

How to Book a Reading? Check it Out